Vib lures: perfect hard baits for zander in the dark 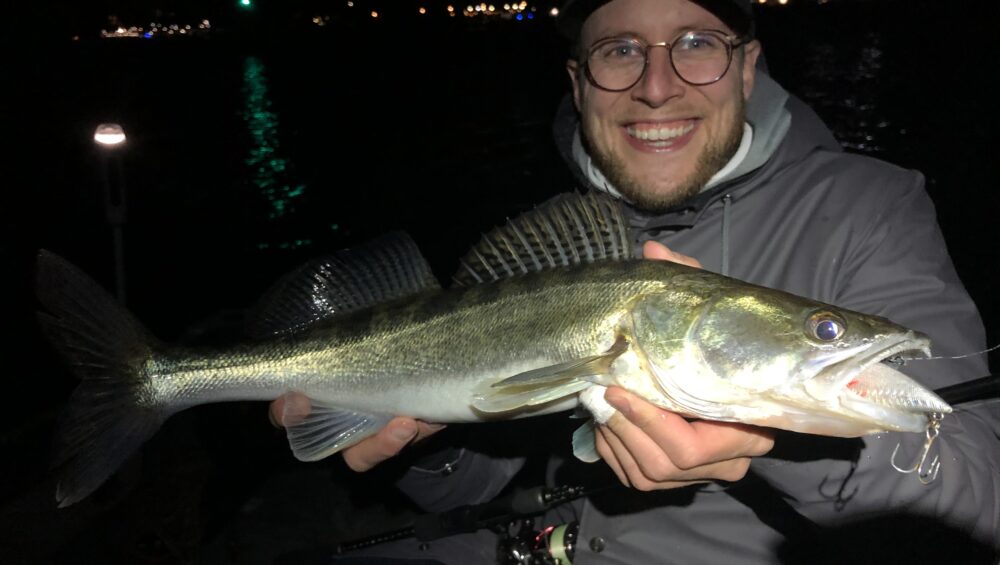 I don’t dare to say with certainty exactly, but vib lures result in excellent zander catches after sunset. I was introduced to these rattling hard baits by predatory fish expert Michel Dekker. He showed them to me during a river fishing masterclass for my book (see pages 273-282 in ‘Denken als een vis‘ – only available in Dutch, unfortunately). That session he caught a monstrous asp with it. I have been a big fan ever since. Simply put, you can fish these baits the same as a soft bait. That is to say: cast it in, let it drop to the bottom, and then jig it back to the shore. Make sure to touch the bottom frequently to make sure you are in the ‘zander zone’. In most cases, the moment that the vib lure falls to the bottom is the moment when the zander takes the bait.

The results during the day were already very promising, but in recent months we have noticed that they perform very well just after sunset. In fact, on some evenings you catch it much better than with a shad. It is striking that we mainly catch the larger fish with it. The average length of the fish we catch with vib lures is estimated to be 10 cm higher. While I’m not sure why they do well in the dark, I do have a few ideas.

In the first place, these vib lures give off – the name says it all – vibrations. These extra stimuli in the form of vibrations make the walleye extra perceptive. The hard bites could well be a sign that they mainly attack the vibs out of aggression. Another possible explanation for the success is the relatively large size of these baits. Where a shad is often fairly thin and long, the vib has a much higher body. This allows the zander not only to see the bait better but also to register it better with its lateral line organ. In short: it is almost impossible to fish such a rattle unnoticed past any zander. I would love to show you how to get the most out of this special bait during a fishing day (or night!), because there is a lot more to learn about it.