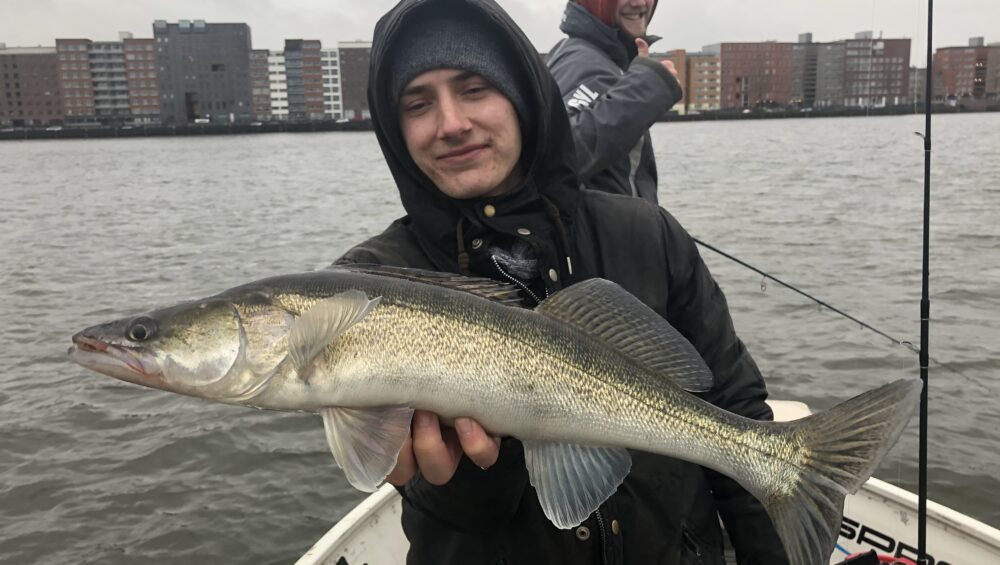 Dropping water temperatures have a major influence on the zander in Amsterdam. They are rapidly becoming much more passive and increasingly ignore lures that were very successful until recently. Aggressively fished vib lures are completely ignored. Also, the number of bites on soft baits decreases rapidly. At the same time, you can see the fish slowly but surely looking for deeper water. At the bottom of the slope, at 8 to 10 meters depth, the fishfinder shows more and more signals of zander. Shallower spots, up to 5 meters deep, are becoming emptier.

It then seems logical to focus on the deeper water. After all, that’s where we see the most fish. That turns out to be a misconception because although you see concentrated schools of fish, they do not or hardly bite. Single zander may make a mistake by touching your soft bait. But waiting over half an hour for a bite doesn’t make any sense either. It turns out to be much more effective to focus on the zander that still feeds on the shallows – even when their numbers are decreasing. These fish are apparently not yet ready to hibernate in the deep water. They have to eat a little more to get through the long months. That is good news for us: these zanders are at least prepared to attack our lures. That is if you choose the right lures and the right technique.

The power of the drop shot technique

Last week we were able to properly test the effectiveness of various techniques. I have been out on the water four times and have clearly noticed that actively fished shads and vib lures become less effective. And that while we could still see quite a few signals of zander several inches above the bottom. This is active fish for sure. In any case, these zanders seem to be active. The solution turned out to be simple: switch to the drop shot. By offering the soft bait as subtly as possible, you try to convince doubting zander. Slight bites that are invariably missed with the shad, we can cash in with the drop shot. A ‘weightless’ rig ensures that the soft bait slips in the fishes’ mouth just a little bit easier. And that resulted in a clear win for the drop shot. During the last session, my guests caught 18 walleye while I was stuck on two fish while vertical with a shad. Today’s topper turned out to be the Spro InstaWorm. This is a remarkably large worm, but that appears to be no problem given the good catches.